The beatiful province of Mendoza, in Argentina, famous for the Malbec wine, still awaits for the implementation of jury trials in the next few months. However, it has already gained worldwide interest with a case that shook the country, Israel, Australia and the whole Jewish community around the globe. The case is known in Israel as "Mendoza´s Devil" and it will be decided by a jury of twelve.


Today, Nicholas Gil Pereg (37, born in Israel) is charged with the aggravated homicide of two Israeli tourists. His mother, Pyrhia Sarusi (63) and his aunt, Lily Pereg (54, a prestigious Australian microbiology professor), who went missing for a week and a half, before the leads indicated that their son and uncle was the main suspect.

The disturbing crime received worldwide coverage due to the cruelty of the crime and to the intriguing personality of the defendant, who received elite military training in Israel and has an IQ of 180.

However, when he moved to Mendoza he lived his life as a homeless. He had dead cats dissected in his property, where weapons, ammunition and a large amount of cash (near one million US dollars) were also found.


Many observers say that he is trying to play the card of an alleged insanity. Pereg appeared for his bail application hearing, where he displayed incredibly odd behaviour: "Miau, miau", he meowed loudly at the judge (watch Gil Pereg meowing). Asked for his name, he answered: "Floda Reltih" (Adolf Hitler backwards). When he was asked if he had children, he replied: "my 37 cats". He finally urinated on the floor, forcing the court to adjourn in order to clean and ventilate the courtroom. He will remain custody until the jury trial.


Gaspar Grieco, a journalist from Diario Perfil and BA Times wrote an outstanding article in the newspaper with all the details surrounding this femicide. The article (in English) can be accessed by clicking on the following link. (Trial by jury, for a grizzly murder).

Hundreds of people in Mendoza, whom are not familiarized with the jury system, have been contacting the local Judiciary and government to inquire about the possibility of becoming part of the jury panel. In addition, it is expected that leading press from across the globe will be accredited to witness the whole trial. So far, the CNN, Fox, BBC, EFE, Reuters, FrancePress and other international journals, especially from Australia and Israel, actively reported about the case.

With this case, and through a provincial jury law that has been thoroughly designed, Mendoza will now have the opportunity to display the implementation of the jury system in Argentina to the world. 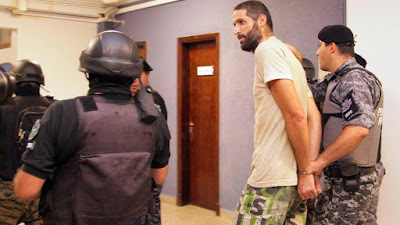 It is remarkable that the horrifying homicide of two women will be tried before a panel of six men and six women, as requested by the jury law. The equal gender composition represents a unique feature that Argentina has established by law, and now the world will have the opportunity to witness this novel feature fully operational.

- Daily Mail UK (02/23/19) "Nephew, 36, accused of murdering his mother and Australian aunt in Argentina meows like a cat, urinates on the floor and claims he does not remember his age in bizarre court appearance" (see)