THE JURY TRIAL IN CHACO: LEADERS OF INDIGENOUS PEOPLES ASSEMBLED GROUP OF NGOs

A meeting of great significance took place in Resistencia, Chaco.

Because one year has passed since the jury trial law went into effect and the random selection of citizens has yet to be implemented, leaders of indigenous peoples convened a meeting with the members of the INECIP, and of the AAJJ and APP.

Chaco´s jury law is the only one in the country that explicitly guarantees not only gender equality, but also provides for a special jury for indigenous peoples when the victim and the accused belong to this community.

During the meeting, Judge Victor Del Rio (INECIP-AAJJ), along with Sandra Saidman and Marcelo Wurm Timez (APP) explained the central aspects of the law, its genesis, meaning and implications in rebuilding a justice system with active citizen participation.

They also talked about the way of resolving conflicts of criminal matters through citizen´s participation. The jury is a symbol and a republican form of abandoning colonial, supposedly “enlightened” justice. This aids in achieving the objective of a close, understandable and reasonable justice that involves different points of view, especially from the perspective of our indigenous peoples.

All participants spoke and were heard. Trial by jury, in all cultures and communities in which it has been implemented for two millennia, is something that was understood at this meeting: indigenous peoples have always been familiar with the judgment of their peers in the form of the trial by the counsel of wise men who resolved the conflicts, as this tradition was transmitted from generation to generation until today.

All questions and concerns about how they would implement the summons and jury selection were answered, as well as the particular challenges implicated by the formation of a mixed jury integrated with members of the indigenous peoples: Qom, Mocoví and Wichi. 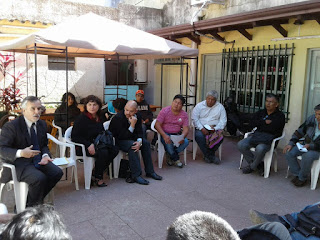 During the talk, the current justice system was severely criticized, because it is in exclusively professional hands, which invites distrust and skepticism. Indigenous leaders clearly laid out their position on a justice system of privileges for the powerful—a system that they question for making them feel disrespected and ignored because of their status as indigenous.

They stated that the possibility of integrating the jurors would be the chance, for the first time, for their special vision and opinion to be taken into account to resolve conflicts.

Indigenous leaders regretted not having had more information, but they were eager to transmit information about this law to the rest of the leaders of indigenous organizations throughout the province, recognizing the need for its discussion in depth.

Some doubts were noted about how to integrate the lists of the communities and the possibility that they would not appear in the register of the Provincial Institute of the Aboriginal Chaqueño, analyzing the different alternatives to expand it and update it.

They also talked about the need to organize the consultation of article 169 of the OIT, as a prerequisite for the implementation of the jury with integration of indigenous communities.

The INECIP, the AAJJ and APP were invited to the next meeting, which will take place on September 19th, in order to continuing making progress with a jury workshop. We have also been invited to attend the Meeting on Human Rights of Indigenous Peoples, to be held in the city of Castelli (the entrance of the Impenetrable Chaqueño) on the 28th and 29th of October, where there will be a jury trial workshop.

In short, this has been the chronicle of this excellent meeting which could be decisive for the provincial government to react and implement the random selection of citizens, as is provided by the law of trial by jury of Chaco.