Mendoza wrote today one of the golden pages in the judicial history of Argentina: a unanimous jury found Sebastián Petean Pocoví (34) guilty of all four charges. The trial had inmense repercussion in Argentina.

The incident occurred on May 25, 2018, in the midst of a siesta in Mendoza, when the man stabbed his wife's abdomen, arm and back with a hunting knife. He fled in a Ford Ranger truck at full speed, almost killed four policemen during his escape and, when two other policemen on a motorcycle tried to stop him, he accelerated and ran over them at a 100 miles an hour. The two officers died immediately. His uncontrolled flight ended when he lost control of the vehicle.

"The defendant used his truck as the murder weapon", said prosecutor Guzzo to the jury during his closing statement.

Petean´s wife, Carolina Seser (33) underwent a serious surgery and the doctors managed to save the lives of the twins. Today those girls, 8 months old, are called Lara and Ema, and carry their mother's last name, since Petean doubts fatherhood.

"He was screaming at me that he was going to kill me and the twins", she said to the jury. "He was heavily intoxicated with cocaine and booze. The discussion began because of his "sick jealousy." He said that the girls were not his. "He was paranoid and even accused me of going out with a cousin of my grandmother, a 74-year-old man with whom I had no dealings and who had just arrived from Buenos Aires#, said the woman.

During the attack, the family dog was also wounded in the skull. "I only remember that while he was stabbing me, the dog was barking, jumping and trying to defend me. The loyal animal was also a victim," she said.

After more than three hours of deliberation and inmense anticipation throughout the province, the jury announced that it had its decision.

Previously, the jurors requested to watch again two fundamental videos of the chase in route 40 on that fateful May 25th, 2018. Before a crowded room and in the middle of an unbearable tension, presiding judge Rafael Escot had the defendant stand up to receive the verdict from his peers.


"We, the jury, unanimously find Petean Pocoví guilty of murder in the first degree, attempted murder and attempted femicide as charged"

With his head down, Petean Pocoví received one by one, like crushing blows, the four unanimous guilty verdicts that sentenced him to life. Prosecutor Fernando Guzzo, and private prosecutors Claudia Vélez and Eduardo de Oro sighed with relief.


The political and social impact was impressive. The media, newspapers, radios and families from Mendoza did nothing but talk about the verdict of the jury. The newspapers immediately echoed the news, spurred by the jury wave that invades the country.

It is indeed a momentous week in Argentina for its new jury systems. Four days ago, doctor Villar Cataldo, who killed an armed thief in self defense, was found not guilty. The verdict captivated the country. Only two days ago, the Supreme Court of Justice ruled that the provincial jury systems are consistent with the Constitution. It was the first ruling in 165 years dealing with jury trials. 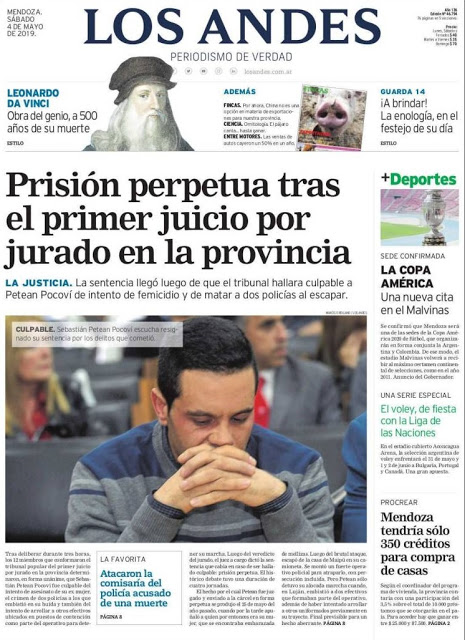 After the jury´s unanimous verdict, all the tension accumulated during the four days of the trial was released. The relatives of the victims broke out in tears. Among touching embraces with their lawyers, the wife of one of the victims said: "My little son now knows that his father's murderer is going to receive the appropiate punishment".

The trial had an unprecedented transparency in the history of the country's judiciary. The opening and closing statements and the verdict were broadcast live on television and the Internet. Thanks to the presiding judge and the State Supreme Court, the entire country was able to follow what happened in the splendid courtroom, specially prepared for this historic moment.

Also, thanks to a joint initiative between Prof. Valerie Hans from Cornell University (New York), INECIP, AAJJ and the State Supreme Court all the jurors, judge and attorneys filled in a questionnaire after the trial. The new jury system in Mendoza will be subject of empirical research from the very start.

As usual, the unanimous verdict of the jury sent messages in all directions: towards those who fight gender violence, inside the police and the entire judicial system. The citizenship demonstrated, once again, that they were up to the challenge. The jurors also demonstrated, after the ruling of the Supreme Court, the wisdom of the ancient unanimity rule. Nobody holds now any doubt after a pronouncement of twelve out of twelve persons.

The defense attorney said that he would waive the appeal. 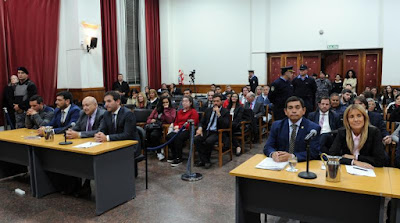 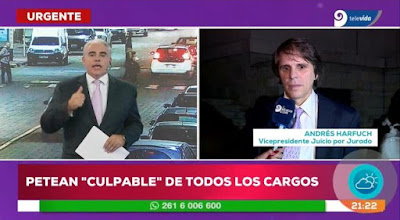 - Clarín (05/04/19): "A jury convicted the mountain guide who stabbed his pregnant wife and killed two policemen in his escape to life imprisonment" (ver)