In his first public report since assuming his position, the new ambassador of the United States to Argentina, Edward Prado, openly praised the advantages of the system of trial by jury and oral trials:


"People have to trust in the Justice, and for that transparency is important. Precisely an oral hearing, where the public and reporters listen to everything, helps to understand why that decision was made, so that everyone will have more confidence in the system. And if the citizens also participate as jurors, they are part of the Justice too." 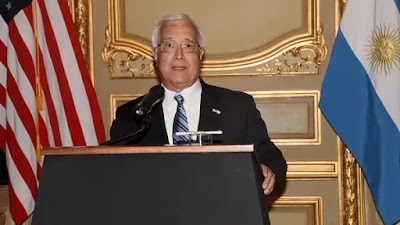 Until very recently, Edward Prado was a prominent judge of the Federal Court of Appeals for the Fifth Circuit, which originally covered the states of Florida, Georgia, Alabama, Mississippi, Louisiana and Texas. The Court gained worldwide recognition for its progressive rulings, which expanded the rights of African-American minorities during the Civil Rights Movement, in the tumultuous 1960s. In 2004, Prado was almost nominated as a candidate for the Supreme Court of the United States.

A staunch defender of trial by jury, Prado was last in Argentina in 2016, invited by the INECIP and the AAJJ, to train and advise judges, prosecutors and defense attorneys on the jury system. He went to several provinces and his visit was a total success. (La Suprema Corte de Justicia de la Provincia de Buenos Aires recibió al juez de Corte Federal de Apelaciones Estadounidense Edward Prado)

It is fortuitous that only a year and a half later he is now the US Ambassador to Argentina.

So strong is his commitment to the transparent and democratic model of oral justice and juries for Argentina that his first official activity - just a day after landing in Argentina - was to attend the famous Feria del Libro where the Council of the Judiciary of the CABA organized a conference on trial by juries. 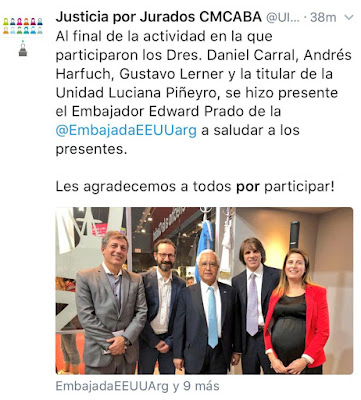 His appointment as Ambassador came at the same time as the jury system in Argentina has not only been established in Buenos Aires and Neuquén, but is also expanding rapidly to several other provinces. Beyond his new diplomatic mission, his 35-year experience as a federal judge will be invaluable for the consolidation of the trial by jury model envisioned in our National Constitution. 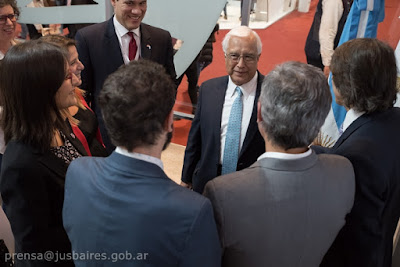