In another memorable day for the Argentine Republic and its National Constitution, the House of Representatives of the province of Mendoza gave preliminary approval of the trial by jury bill. Mendoza is the fifth largest Argentine province and worldwide known for the exceptional qualities of their wines. The jury bill was approved by 31 votes in favor and 17 abstentions, after two hours of debate. Only one week ago, Argentina´s third largest province, Santa Fe, took a similar step and passed a first class jury bill.

This concludes a fascinating political process that surprised the country when, in April 2018, Governor Alfredo Cornejo (UCR-Cambiemos) and one of his most tenacious political rivals, senator Anabel Fernández Sagasti (FPV) agreed to pass the law of trial by jury. Just four months later, the law is halfway to being approved. In the next weeks, the Senate will pass the bill.

The initiative was endorsed by the ruling Radical party and an enormous part of the opposing parties. A wing of the Peronist party, still absolutely in favor of the jury trial, voted for a minority opinion that proposed improvements to the main text; hence the abstentions recorded. 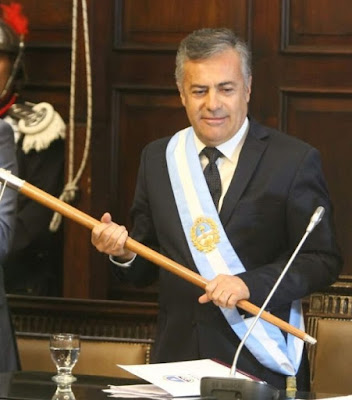 Mendoza´s jury bill - named by the press as "The Sagasti law"-  provides a classic jury model with twelve citizens, six men and six women led by a single judge, with a voir dire to select the jury (4 peremptories per side), instructions from the judge on the law and a final general verdict with the possibility of a new trial in case of hung jury. The jury will mandatory try, initially, only first degree murders.

Trial by jury in Mendoza had been discussed for years, with several very good proposals, such as the one presented by the Peronist representative Lidia Ruiz in 2014. Those efforts began to bear fruit. Trial by jury actually enjoys an enormous consensus among the Judicial, Executive and Legislative branches.

Next week, at the Supreme Court of Justice of Mendoza, there will be an International Conference with the prestigious scholars invited from the United States, Valerie Hans and Paula Hannaford-Agor.

In addition, there will be a mock jury trial -a gender violence murder case- for which almost a thousand Mendozans have registered, expecting to be selected as jurors. They will participate in this exercise to show citizens how the jury works. 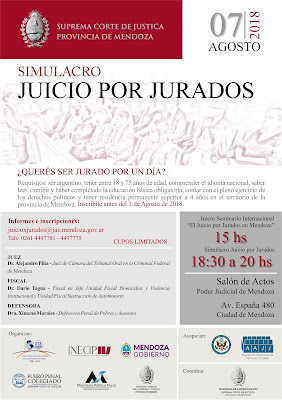