For the first time in history, Argentina’s Supreme Court of Justice will issue a ruling on the right to trial by jury.

Following the lead of other Supreme Courts around the world, Argentina´s Supreme Court of Justice announced publicly the list of constitutional issues that will be dealt with in 2019. Among these issues is the question of whether the nation and its provinces should adopt jury trials, a topic discussed in the Argentine Constitution but never resolved.

Between May and June of this year, the Supreme Court of Justice will make history by hearing Canale Bros. v. Neuquén, which is poised to be the first ever leading case on jury trials in Argentina. The case comes on appeal from the province of Neuquén, in Patagonia, where the Canale brothers were found guilty of first degree murder by a jury. The brothers were sentenced to life imprisonment and they appealed unsuccessfully before the Neuquén Court of Appeal and the Neuquén State Superior Court of Justice.

During the case, the Court will weigh multiple arguments and constitutional issues raised on appeal by the Canale brothers. These include the following arguments related to jury trials:


1) That the province of Neuquén lacks competence to legislate on jury trials, since the States had delegated such powers to the Federal Congress. Ch. IV, § 75, subsec. 12 CONSTITUCIÓN NACIONAL [CONST. NAC.] (Arg.)

2) That the guilty verdict is unconstitutional because it was not unanimous. The brothers were sentenced to life imprisonment due to a 10-2 verdict, which violates the Equal Protection Clause (§ 16, CONST. NAC.), since unanimous verdicts are required in the provinces of Chaco, Río Negro, Buenos Aires (for capital punishments only) and Mendoza.

3) That since trial by jury in Neuquén is mandatory, they did not have the chance to waive their right to a jury and be proceed with a bench trial instead. Every province that allows for jury trials (except the province of Buenos Aires) makes trial by jury mandatory for the most serious crimes. § 118, CONST. NAC.

4) That the jury's general verdict - which does not give reasons for the conviction - unconstitutionally restricted their chances on appeal.

5) That the judge's instructions to the jury failed to properly explain the reasonable doubt standard and, in addition, that the judge directed the jury on some questions of facts. This is a procedure strictly forbidden in criminal trials in Argentina and in the United States.


Argentina´s jurisprudence on trial by jury

First, this case is particularly noteworthy because it occurred in the province of Neuquén. While Córdoba was the first province to implement jury trials in 2005, its juries were “mixed” and consisted of eight civilian jurors and two judges. In 2011, however, Neuquén opted for the classic civilian jury model which has been implemented in an overwhelming majority of provinces in the country.

Furthermore, in light of the complete success of classic juries in Buenos Aires province and Neuquén, and after more than 200 jury trials, the Supreme Court of Córdoba has essentially changed the mixed court into a full jury system: the jurors must deliberate alone, without the presence of the two judges in the jury room until reaching a verdict, they must receive instructions on the law from the presiding judge only, and the jury must be selected through the voir dire process. For more information on this phenomenon (see the ruling)

Second, the case is noteworthy because Supreme Court decision in Canale will overlap with the Congress’s discussion of a federal jury bill which, as of a month ago, had half the support of Congress. There is no doubt that the Canale case will act as a leading case and give the final backing to a jury bill that lay dormant since the drafting of the Constitution in 1853.

Third, the almost 60 rulings by the Buenos Aires High Court of Appeal, the Court of Appeal and the Superior Court of Justice of Neuquén already mark a trend that is attracting the attention - and admiration - of scholars, lawyers and observers from all around the world. These rulings begin to show a remarkable alignment to the institutional role that the jurisprudence of the Supreme Courts in common law countries has been performing for centuries. Common law jurisprudence’s role has been to decide concrete cases but, at the same time, to zealously preserve the right to trial by jury of the Constitution and its essential parts, some of which are challenged by the appellants in this case.

For example, the Supreme Court of the United States, the Supreme Court of Canada and the House of Lords in Great Britain have, for centuries, monolithically guarded the jury trial and its essential parts, as these are constitutional guarantees. Many are well known: there are twelve jurors directed by a judge, there are instructions on the law, a unanimous and general verdict is needed, voir dire is used for the impartial selection of the jury panel, proof beyond a reasonable doubt is needed, deliberations follow a Rule of Secrecy, and a final verdict must be reached.

These common law courts use each ruling to preserve the constitutionalized aspects of trial by jury, avoiding any distortion but, at the same time, ensuring that the jury continues to be a flexible institution that can adapt to different times. The jury was successfully used through the Ancient, Middle, Modern and Contemporary Ages and, thanks to the protection of their Courts, it still maintains its main defining notes. Many of these defining notes have been legislated in Argentina´s provinces. 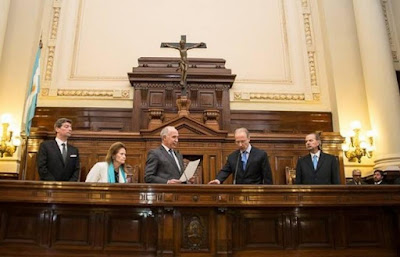 Finally, Argentina´s Supreme Court is expected to refer to the recent jurisprudence of the European and American International Courts of Human Rights, in re Taxquet v Belgium (ECHR, 2010), Judge v United Kingdom (ECHR, 2011) and VRP, VPC and others vs. Nicaragua (IACHR, 2018). These decisions definitively and categorically established the conventional validity of a number of aspects of the typical jury system: a general verdict, voir dire, legal instructions of the judge, the polling of the unanimous verdict, and each and every method that the jury has to prevent any arbitrariness. The decisions also stressed that a jury must never give reasons for their verdicts and therefore there is no breach whatsoever of any conventional right.

But, in addition, the ECHR and the IACHR highlighted in these rulings that jury trials and bench trials are different procedures and with different control mechanisms. Both enjoy constitutional and conventional status, so they must coexist with their peculiarities. Both processes - with and without juries - must be respected, without imposing one another's characteristics that would fundamentally alter them.