LA PLATA, Argentina: There was much excitement and celebration throughout the country following a jury’s acquittal of a man who was framed for a murder he did not commit, and who had spent 4 years in prison awaiting justice.

In La Plata, a jury’s not guilty verdict liberated Federico Lisi Ríos (25) after four years of unjust imprisonment in Olmos Penitentiary - for a murder that he did not commit and that is punishable with life imprisonment - had a massive impact on Argentina. The excitement was in large part thanks to the brilliant column of journalist Germán Wille for the newspaper La Nación (ver artículo de La Nación).

After that article, the case went viral and made headlines. Radio, TV and newspapers throughout the country covered the case (see photos), stressing first their astonishment and then their indignation when they became aware of the deplorable state of La Plata's justice system. Eg: the inspector of the police station where Lisi was illegally forced to confess the crime (akin to something from a Medieval Inquisition) and the judge that did not quash the  confession are both now charged and imprisoned for serious crimes in another case of great notoriety. 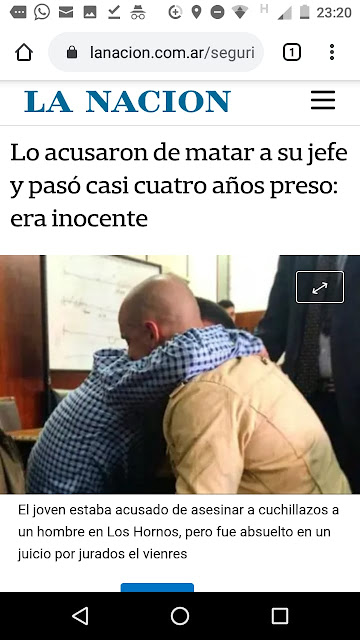 Cosecha Roja newspaper wrote: "The son of the electrician Miguel Ángel Quesada found his father dead in the house of La Plata. He had received about 40 stabs in the chest and neck. The locks had not been forced open. One of the first who arrived at the scene of the crime was his worker, the assistant of the electrician Federico Vicente Lisi Ríos. The police "invited" him to the police station to give testimony. Instead of that, after several hours of interrogation from four police officers,  without giving him his rights to counsel, without any defense lawyer present, the young man “confessed” to the crime. Judge César Melazo –currently alleged to be leading a criminal gang of thieves/robbers- ruled the police procedures was legal. Federico Lisi spent 1375 days in prison.

“The confession of the accused at police headquarters is prohibited. In order for a confession to be valid, the defendant must have the possibility to speak with a lawyer, it must be made in the presence of the prosecutor and his rights must be read ”, explained lawyer Gonzalo Alba, defender of Lisi Ríos. Throughout the trial it was clear that the main evidence against him was that confession taken at the police station. The then inspector of the police station was former commissioner Sebastián Cuenca, currently  sentenced to 3 years and 8 months in prison - having also been terminated from the Buenos Aires Police Dept. for receiving bribes".


Gonzalo Alba is a lawyer, and only 28 years old. He was 25 when he took the case. He celebrated three more happy birthdays before the trial took place. Never before had he dreamed that one day he was going to become a civic hero, defending zealously and successfully a poor boy of humble origins against a plot of police corruption fully endorsed by the judicial system. Except for the jury.

A shameful frame job unjustly imprisoned an innocent man for four years without any of the justice system’s checks or balances working. Shockingly, on appeal the confession was upheld as admissible. A confession obtained illegally under duress at the police station with four policemen surrounding him for hours. No lawyers present. No guarantees. No Miranda rights. Without the protection of a court of law. 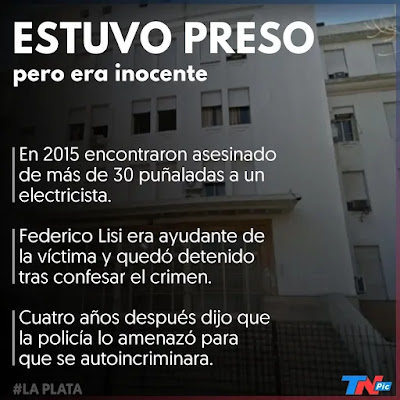 For those who conceive of  the legal profession as the art of litigating in oral and public hearings - there can be no greater honor than that of obtaining a jury's not guilty verdict for an innocent person who has been unjustly imprisoned.

Gonzalo Alba had that privilege. His was an epic deed. Against all odds, he managed to get the jury to put things in their place and end with Federico Lisi Ríos´ordeal.


"When the jury gave its verdict, Lisi Ríos and I broke into tears. We hugged for a long time and that is where I realized that the jury stood up and began to applaud. I will never forget it in my life." , Gonzalo Alba told the AAJJ.


AAJJ: Could you summarize the case?

GA: The press reported it quite well. Lisi Ríos spent 1375 days unjustly imprisoned thanks to an illegal confession obtained under severe interrogation at a police station. That confession  contradicted the rest of the weak circumstantial evidence that prosecutor Leyla Aguilar had against him. We all know that such a confession is completely null and void. However, it wasn´t quashed by any  La Plata judges, except by the jury.

A public defender originally asked for bail and tried to suppress this evidence. Judge César Melazo did not quash it, he denied bail and accepted the charges of murder in the first degree, punishable by life imprisonment. The public defender unsuccessfully appealled. Without getting too much into the intricacies of the decision, the appellate justice´s answer was, more or less "the formalities surrounding the act are fulfilled given the presence in the police station of a civil witness and that gives prima facie legitimacy to the act." Incredible but real.

AAJJ: Sections 141 and 282 of the Criminal Procedure Code are clear in establishing hard procedural deadlines. If a person is in jail, the investigation cannot last more than four months and the entire process cannot exceed two years. What happened here?

GA: Lisi Ríos is arrested the day the case begins, on December 17, 2015. The investigation did not last four months. It lasted a year and a half and ended on May 20, 2017. There the case passed to the circuit judge, where it laid dormant until last Friday. That is, two years and four more months added to the year and a half he had been in prison. All legal deadlines were expired. Moreover, I insisted so much that they gave me a date in court for September 2019, since the trial was scheduled for February 2020. 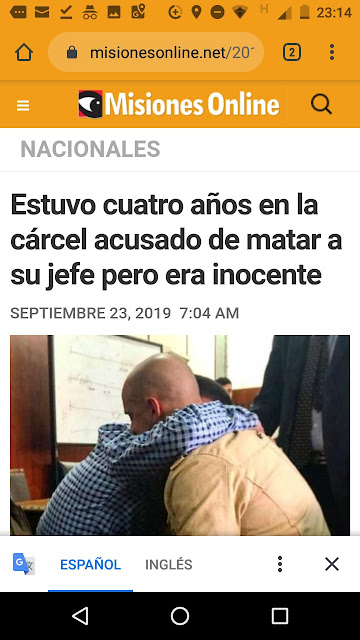 AAJJ: When did you take the case?

GA: I began to intervene in early 2016 with my colleagues Mauro García Strigl and Lautaro Iroz. I immediately identified with the case and cause. It was a human drama. In the middle they offered a plea bargain and we said no. During the discovery hearing I renewed my petition to exclude the illegal confession at the police station. It was ruled admissible.

It is to long to detail, but none, absolutely none of the circumstantial evidence incriminated Lisi Rios. The DNA on the knife with which Quesada was killed was not his. There was DNA from other people in the house. Lisi Ríos arrives at the house to work a day after the death of the electrician. He appears when Quesada was already dead. This was certified by the experts, who accurately dated the day and time of death. But since Lisi was young, poor and from Los Hornos neighbourhood, he was taken to the police station "as a witness". The rest is history:1375 days in prison and the murder case "solved".

AAJJ:  Why do you decide to go to trial by jury?

GA: I am an ardent defender of jury trials. Criminal justice in Argentina is completely discredited and one of the ways to overcome it is to allow citizens to take over the control of criminal trials by participating in them as citizen judges. In this way, we not only comply with the Constitution, but we set in motion a healthy mechanism for popular participation.

GA: This was my first jury trial. Apart from the outcome, the experience of trying a case in front of a jury is really exciting. But in this specific case Lisi and I never had doubts. If all these injustices were considered legal by this Judicial Power in a corporate manner, we said:  "Let us tell all this to the people."  This case was a trial about the facts, not so much about the law. Sometimes, when you discuss questions of law,  you get entangled in discussions where you end up with three bench judges finding you guilty of a very serious charge with flawed and illegal evidence and nobody will ever care. We always knew that the jury would listen to us and understand much better. We could do well or badly, but they would assess our arguments with greater impartiality, justice and common sense. And so it happened. 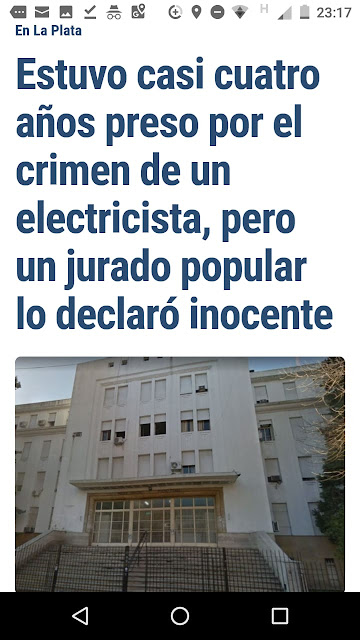 AAJJ: How was the trial and why do you think the jury found Lisi not guilty?

GA: The jury focused on three objective aspects that emerged clearly over the course of the trial. The overwhelming statement of Lisi Ríos, the negative DNA on the murder knife and the presence of another subject's DNA,  and the expert witness that certified the exact moment and time of death. The prosecution could never overcome these factual obstacles. It was very solid. Lisi never denied his relationship with Quesada, since he worked there. But there was no proof that he killed him. The jury saw it that way.

AAJJ: The picture of you hugging Lisi that went around the country speaks a thousand words ...

GA: That's right. It is the perfect summary of a grave injustice corrected. When we heard the verdict of "NOT GUILTY", we broke down. Justice had been done. The People had spoken out and put things in order. Lisi Ríos FREE forever. When I recovered a little, I realized that the jury was standing and clapping. I will never forget it in my life. 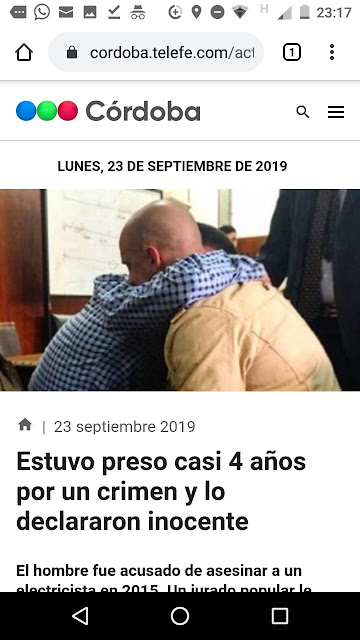