It wasn´t just another day in the province of Chubut. It was a  historic day, full of  excitement due to the local Parliament’a unanimous sanctioning of the right to trial by jury law which is mandated by the Argentinian Constitution. This jury bill symbolizes a return to the noble, ancient democratic and republican tradition that the settlers from Wales brought to Chubut in July 25, 1865.


Few people are aware of a historic incident involving trial by jury which took place in Chubut, Argentina during the XIX century. In 1863, President Bartolomé Mitre ordered his Secretary of State, Guillermo Rawson, to carry out all the necessary negotiations to guarantee the immigration of three thousand Welsh settlers in the Chubut Valley which by then was an inmense territory in Patagonia inhabited by only a few Indian tribes.

Rawson met with Captain J. Love Jones-Parry and Reverend Lewis Jones and agreed to grant land under the promise by the State that they would have total freedom to retain their language, their religion and their local laws. The Welsh men and women arrived aboard the Mimosa sailboat and disembarked at Punta Cuevas.

Those brave men and women from Wales brought jury trials to this land and that is part of their great legacy. From 1865 to 1879, and with the full consent of the National Government of Argentina, the Welshmen of Chubut tried by jury all criminal and civil matters exceeding 5 pounds.

The records of those cases and jury verdicts can be seen  today in the beautiful city of Gaiman, considered a kind of a Little Wales. It was the first public jury trial experience consistent with the Constitution in force in 1853. Today, thanks to this jury trial law, Chubut pays off its debt to the Constitution and pays a well-deserved tribute to the jury tradition that came from Wales 154 years ago.

Chubut can today display with legitimate pride before the rest of Argentina its vibrant past and its luminous present with the jury trial.


PAST, PRESENT AND CENTRAL
FIGURES OF THE LAW

In 1994, and at the request of the great jurist and constitutionalist José Raúl Heredia, Chubut ammended its Constitution and crystallized among its provisions a wide catalog of citizen participation in justice. Lay people are represented in the Council of the Magistracy to select the judges and also establishes the classic jury trial for all ordinary crimes and a mixed court for public corruption cases.

In 2000, an advanced criminal procedural code was passed, drafted entirely by the famous Professor Julio Maier. This code, which unfortunately never entered into force, put the public trial with jurors as the central figure of the procedure.


In November 2006, Chubut sanctioned its current criminal procedure code, which is completely oral, public and adversarial. A new feature is that it included a profound reform of the judicial organization and of the public prosecution and the public defense. It established a pool of judges and left the basis to establish the jury trial by a special law. This code was the product of the intense work in the country of INECIP and a  great jurist, Alberto Binder who has also strong roots in Chubut.

However, after the first experience of Córdoba in 2005, the jury fever invaded the country in 2011. Since Neuquén (2011) and Buenos Aires (2013) sanctioned their classic jury bills and successfully carried out more than 350 trials, many other provinces start to install and/or propose their own jury laws and carry out their first trials.

Mendoza has already performed twelve trials in 2019 and Chaco held its first jury trial less than a month ago. The Inter-American Court of Human Rights (IACHR 2018) and the Supreme Court of Justice of the Nation (CSJN 2019) also recently confirmed the absolute constitutional status of the jury trial which further legitimizes the process.

THE SANCTION OF THE LAW 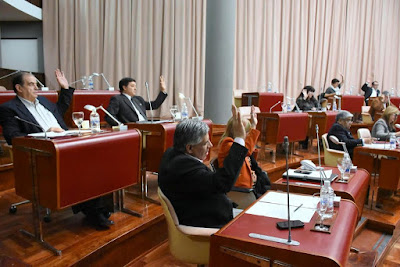 
The final steps for Chubut´s Jury law took place during the 2015-2019 period. The governor Mario Das Neves imposed it with great force on the political agenda in 2017. Alfredo Perez Galimberti, who is a prominent member of the INECIP and  the AAJJ, contributed to the drafting of the jury bill. 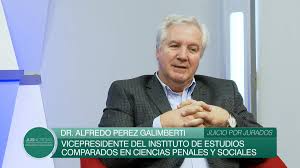 Finally, on December 3, 2019, under the leadership of Representatives Adrián López (Chubut Somos Todos), Eduardo Conde (UCR-Cambiemos) and Gabriela Dufour (PJ-FPV) and several other interventions of all political parties, the jury law was approved unanimously.

WATCH THE MOMENT OF THE APPROVAL